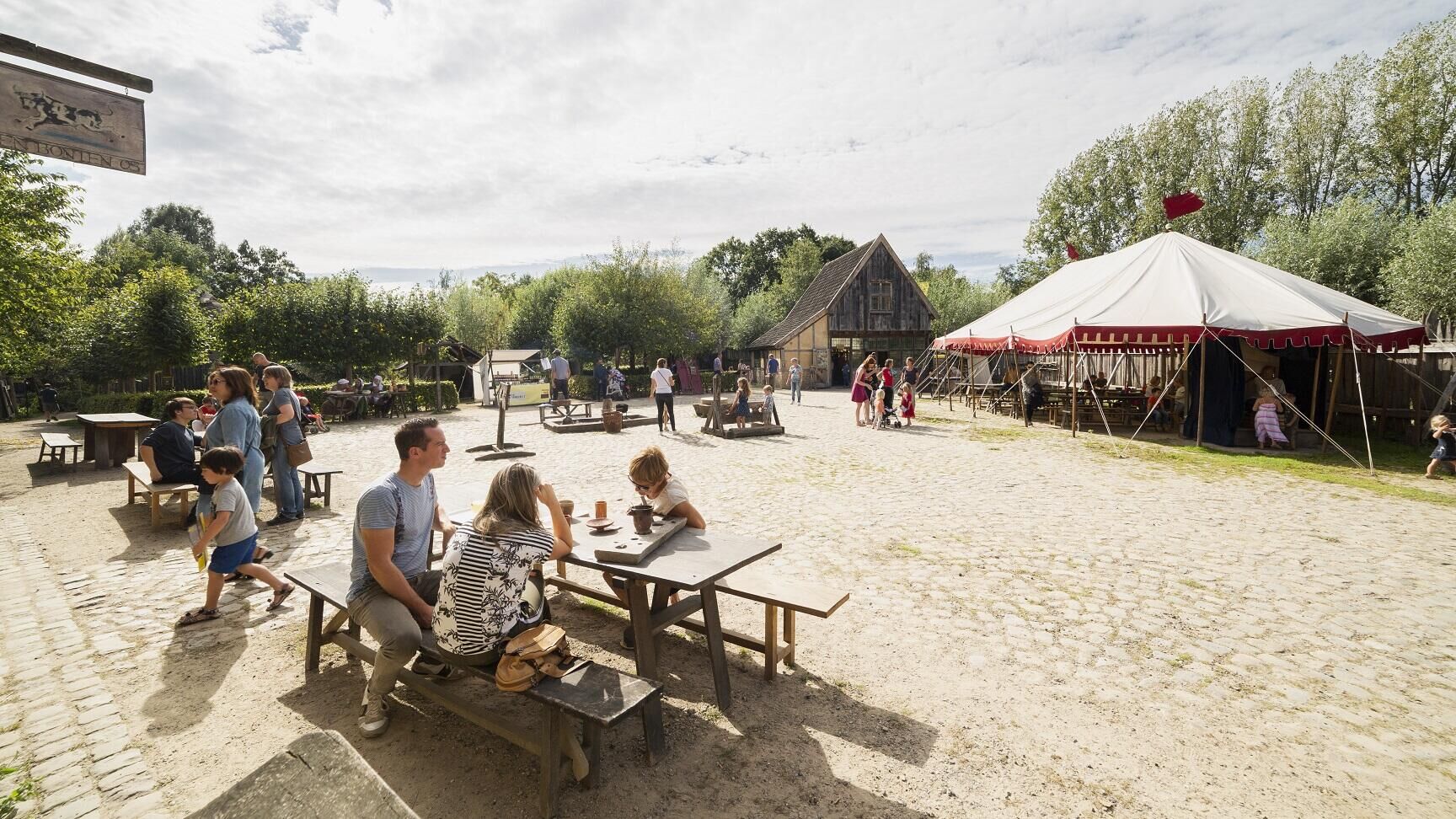 The historical inhabitants of the village, known as time guides, meet our guests on their parcels, homesteads, and workshops for a journey back in time. They are dressed in accordance to their time-period. They give tours, tell stories, and demonstrate the daily activities which were performed by our ancestors. The guest may also participate in many historical activities such as creating fire, archery, iron working, spear throwing, pottery, or weaving.

Would you like to share with us how your experience was while visiting the museum? Then please fill in our questionnaire. Thank you!

Eindhoven Museum and the preHistorisch Dorp

From Prehistorisch Huis to Eindhoven Museum

The preHistorisch Huis (prehistoric house) was built in the Geneper Parken in 1982 under the leadership of Anneke Boonstra. Schoolchildren could go there to experience what life was like back in the iron age. Soon after the construction of the first farmhouse, the iron age village of Eversham was founded. The museum is then known as the Prehistorisch OpenluchtMuseum. In 2002 the museum is expanded by adding the middle ages town of Endehoven. Sadly, in 2003 the museum lost an iron age farmhouse and a caretaker’s house, due to arson. In 2006 both were rebuilt. The reconstructed farmhouse is now known as the Runderhoeve.  In 2016 the museum returned to its roots with the forming of a historical construction team and the clearly recognizable name, preHistorisch Dorp.
The Historische Collectie traces its origins back to 1932. The first Museum Kempenland Eindhoven, located in the former townhall on the Rechtestraat, was opened in 1937. The museum existed until 1939, after which the museum was given access to a hall in the Van Abbe museum.

From 1954 till 1971, the museum was housed in the Waaggebouw on the Paradijslaan, and until 1982 in the former courthouse on Stratumseind. From 1983 till 2012 the museum was in the Steentjeskerk. De Kempenland collection is currently stored in a depot. In 2015, the collection could be seen for the first time in three years as part of the Haar Stad exhibition, about women in the industrial city of Eindhoven.

Eindhoven Museum looks back at the past years in its annual reports (Dutch):

The goal of the foundation: the exploitation of one or more museums, the promotion of cultural activities, and to generate and stimulate interest in human civilization as it relates to the natural habitat, objects of cultural historical value for the city and/or region of Eindhoven, art from the 18th century onward created by Dutch or Flemish artists or related to Noord Brabant, organizing expositions and exhibitions, and other activities. And furthermore, anything related to the before mentioned or their promotion.

Until recently, EM used a board-management model. Since January 2021, EM has been a foundation with a Supervisory Board – director model. New statutes and regulations have been drawn up, guided by the principles of the Governance Code for Culture. The Supervisory Board of the Eindhoven Museum Foundation consists of the following members:

Eindhoven Museum falls under the collective bargaining agreement dagrecreatie. This is linked to the compensation system of the c.b.a. recreatie.